Founder and CEO of Theradome, Tamim Hamid, had struggled with hair loss since he was thirty-two years old. “I tried a variety of hair restoration medications and did not have any luck,” he explained. “After endless attempts to try to regain my hair, I decided to combine my experience as a NASA scientist along with my doctoral work in biomedical engineering, to create a solution that actually worked.”

Previously only available to women, men now have the opportunity to benefit from the Theradome® LH80 PRO with the clearance from the United States Food and Drug Administration (FDA).

Traditionally, therapies for meaningful hair growth for the male demographic have only been available in clinical settings and usually cost thousands of dollars. And non-clinical, less expensive options, not only provide less therapeutic light, but in many cases, they have not been cleared by the FDA. 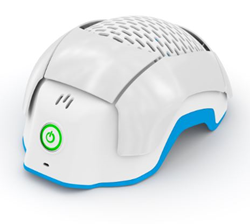 “We are pleased that we can help the millions of men around the globe who suffer from hair loss,” stated Hamid. “This new level of clearance grants a broader audience access to an effective, less-expensive therapy that can be used in the comfort of their home.”

Unlike other devices on the market, Theradomes’ laser helmets feature a proprietary laser technology developed to optimize light delivery and provide users with the ideal wavelength of light for hair restoration. Now, both men and women are able to take advantage of the world’s most advanced laser hair restoration system – the LH80 PRO.

The most advanced in-home solution to treat hair loss:

Theradome, a medical device company based in Silicon Valley, Calif. and made in the U.S.A., specializes in bringing laser-based hair restoration therapies previously only available in clinical settings into the home. The laser helmets developed by Theradome can minimize shedding, thicken existing hair and promote new hair growth.