A federal judge overseeing multidistrict litigation over claims that Merck’s hair-loss drug Propecia causes sexual disorders has ruled that one man’s case can return to the California state court where it was originally filed.

In granting plaintiff Kyle Michelson’s remand motion on Thursday, U.S. District Judge Brian Cogan in the Eastern District of New York said the case did not belong in federal court because Michelson had asserted a viable malpractice claim against his local doctors that could proceed in tandem with his products-liability claim against New Jersey-based Merck

Research indicates that Propecia is most effective in 9 out of 10 men who have mild to moderate hair loss and it can show positive results as early as three months after treatment has commenced.
Furthermore, it is shown to provide a 47% improvement in counts of anagen hair (hair in its growth phase) within 48 weeks.
Most men who take it stop losing their head of hair and some even see regrowth. So, using Propecia may help you to get the head of hair you want and it may boost your confidence during this process. 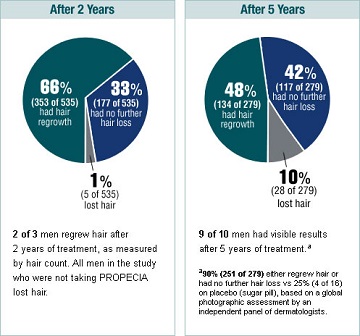 Propecia tablets 1mg are used to treat men with male pattern hair loss(androgenetic alopecia) by increasing hair growth and preventing further balding from all areas of the scalp, for example the front. Propecia1mg tablets can help invert balding in men with mild to moderate hair thinning but does not restore hair that has been lost for some time. It is not used to treat hair thinning in females.
https://www.onlinehairclinic.com/wp-content/uploads/2016/01/propecia-hair-loss.jpg 218 218 admin http://www.onlinehairclinic.com/hair-removal/wp-content/uploads/2015/07/logo-clinic.gif admin2016-06-27 15:38:092016-06-27 06:54:00MDL judge sends Propecia case back to state court
The Evolution of Hair Restoration