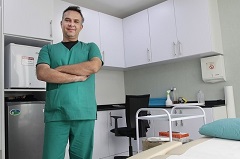 With baldness being more likely in the UAE than in other parts of the world, more young men here are turning to hair transplant clinics.

About 60 per cent of the male population in the UAE is expected to experience some kind of hair loss in their lifetime, while the average global figure is 40 per cent, according to Dubai specialists.

Most men and women in the Middle East suffer hair loss to some degree, which may be an effect of the extreme weather and pollution typical of the region.

Dr Dimitrios Ziakas, who has been working for five years at Direct Hair Implantation at the Al Borj Medical Centre in Business Bay, dealt with 500 patients last year and he has performed more than 3,000 hair transplants.

“When I started here, people were coming to me when it was too late,” he said.

“Now they are much younger and we are seeing a lot more patients.

“Outside of this region the average number of the population with hair loss is closer to 40 per cent, and just 35 per cent in northern Europe.”

With DHI, single hair follicles are directly implanted into a patient’s scalp, with no incisions. Each session lasts between 4 and 12 hours, depending upon the area.

Treatment, which has a 90 per cent success rate, leads to natural growth that lasts throughout an individual’s life and is seen within three to six months. Prices start at Dh20,000.

Patients seeking treatment can also choose a complete transplant using donor hair, so the receptor hair does not have the hormones responsible for baldness.

The treatment takes between five and seven sessions and is done under local anaesthetic. On average, there are more than 150,000 hair follicles on a human scalp and 50 to 100 hair strands can be shed per day.

The clinic is currently treating about six patients a week and the procedure is growing in popularity as celebrities such as cricketers Jacques Kallis and Shane Warne and footballer Wayne Rooney have it done.

“The impact of the surgery or medication can be huge on confidence. It is important now for how men look,” Dr Ziakas said.

“One patient who lost his hair said the grief was worse than when he lost his dad.”

Hair loss for men can begin any time after puberty, with about 80 per cent of men having some hair loss by the age of 70.

In women, it can begin during early adolescence, their mid-twenties and, more commonly, during menopause.

Other causes can be physical and emotional stress, diet, thyroid or fungal infections and medicinal treatments.

A 25-year-old Indian consultant in Dubai, who did not want to be named, said he took action when he first noticed he was losing his hair at the age of 20.

“My hair was thinning and I was also under a lot of stress from work. The more I looked in the mirror every morning, the more stressed out I would become at the thought of losing my hair,” he said.

“It was a physical attribute that I was proud of and although some men look good when they shave their heads after going bald, I wanted to keep my hair.

“I did a lot of research and realised the main reason was genetics and there was not much I could do to stop it so I decided to have implants.”

In his first transplant session in 2011, doctors removed hair from the back of his head and implanted it into the front, where it was thinning. He had the four-hour process repeated in 2013 and again this year.

“I had the procedure on Thursday and was back in work on Sunday,” he added. “It has given me my confidence back and I am less worried and stressed about it now.”