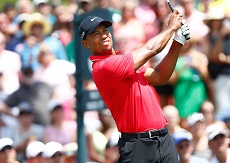 Tiger Woods does not often admit to losing battle but there is one contest that even this elite golfer has had to concede too – and that is hair loss.

In a recent interview with Fox sports which can be viewed below. Tiger Woods gave the world an extraordinary admission about something that has been weighing on people’s minds for quite a while: his hair loss.

We have all watched and seen how his hair has progressively become thinner over the years.

“I’m comfortable with it, but my hairline isn’t,” Tiger said, after being asked by host Colleen Dominiguez if he was comfortable aging. “I have a nice skylight [at home] and I’m at the point where if I don’t wear a hat, I can feel the heat.”

Tiger is asked if he’s ever consider shaving off the rest of his hair.

“I think I will, but I’m fighting the cause, and I’m fighting it hard,” Woods said. “It’s a no-win fight, but I’m hanging in there.”

Well in my experienced opinion, I personally think Tiger is very concerned over his hair loss and it may well be affecting his game and life more than he is prepared to openly admit.

Hair loss is emotional traumatic and weighs on the mind very much, as many hair loss suffer know only too well. If he genuinely wasn’t overly concerned about it then he would most certainly shave it all off and I honestly feel he could pull it off and well, as have many others in the sport world.

There is no doubt that when you are talking about the hair loss of a superstar athletes there is only one name that really comes to mind, LeBron James.

James has vowed to continue to fight the battle to keep what hair he has left and seems Woods will continue in the same vain as he admitted he will continue to battle in what he calls a no-win fight.

Tiger definitely doesn’t appear to be a hair transplant candidate in my opinion due to his diffuse thinning in both the top (recipient area) and most importantly the sides and back ( donor region ) where hair is transplanted from.

This area needs to be strong and unaffected by DHT which Tigers unfortunately appears to be effected by too.

Tigers best step forward in my opinion if he wishes to keep up the fight against hair loss is to prevent the cause of hair loss in men and stop DHT attacking his hair from miniaturising.

Dihydrotestosterone (DHT) is an active metabolite of the testosterone hormone that is formed in the adrenal gland, hair follicles, prostate glands and testes. DHT is a naturally occurring hormone, but in genetically predisposed people, DHT can bind to the hair follicle and cause hair loss by deteriorating the follicle.

Once the follicle is damaged too much, it cannot repair itself and ultimately dies, unable to produce further hair.

Understanding the role of dihydrotestosterone in MPB is an important step to finding the right treatment for you. Products that prevent those hormones are often called DHT Blockers. Only three proven medications can effectively stop hair loss and in many cases re-grow hair.

These are Minoxidil, Propecia and Nizoral Shampoo. See more information on treatments at www.americanhairloss.org.

Whilst preventing further loss he could use ‘Hollywood’s secret’ which are hair ‘concealers’. These are very popular devices amongst celebrities, that maximise what hair you have left. They add thickness and density through magnetic fibers that coat the hair or coloured moisturisers for the scalp, and look very natural.

Nanogen fibres are the most commonly used and well known concealer product and would work well on Tiger given the amount of hair he still has left and help “bulk” up his diffuse loss pattern.

It is very admirable that Tiger has opened up to a degree about his hair loss and it might not be too long before we hear Tiger interviewed like so many other celebrities about their hair loss and the emotional aspects of how it effects them – on the internationally syndicated Radio show The Bald Truth Radio Show.