A group of South Korean scientists has developed a new type of biochemical material to prevent hairloss, the science ministry said Monday, opening a new gateway for treatment in the field.

The team led by Choi Kang-yeol of Yonsei University discovered that a protein called CXXC5 acts as negative regulator of the Wnt signaling pathway inside of a cell that is linked to follicle development and hair regeneration in adults, the Ministry of Science and ICT said. 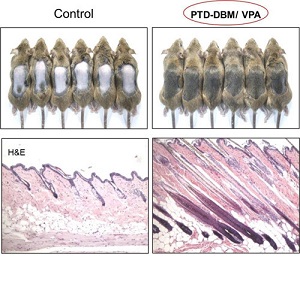 In order to prevent CXXC5 acting as a negative regulator of the pathway, the team successfully developed a biochemical material called PTD-DBM.

“Disrupting the CXXC5-Dishevelled interaction with a competitor peptide activated the Wnt pathway and accelerated hair regrowth and wound-induced hair follicle neogenesis,” the researchers said in a paper.

The research was funded by the science ministry, and the findings were published in the latest edition of the journal “Journal of Investigative Dermatology.”