Women pay an average of 40 percent more than men for minoxidil foams – a hair loss remedy most commonly known as Rogaine – according to a new analysis from researchers at the Perelman School of Medicine at the University of Pennsylvania.

The price difference appears despite the fact that the men’s and women’s version of the products – which are branded and marketed differently — contain the same drug strength and inactive ingredients. JAMA Dermatology published the findings online today.

“Gender-based consumer price differences are well-documented, but we believe this is the first analysis comparing the pricing of medication along gender lines,” said Jules Lipoff, MD, an assistant professor of Dermatology and the study’s lead author. 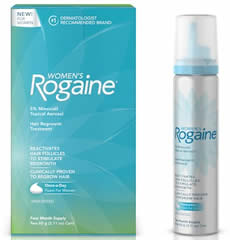 An estimated 50 million men and 30 million women in America have androgentic alopecia – otherwise known as male-pattern or female-pattern baldness.

With men, it usually presents as a receding hairline, while in women, it usually causes thinning of the hair. A recent study found the global market for treatments of this condition will reach $11.8 billion by the year 2024.

There is now a version of the product sold to both men and women as a foam. Women apply it once daily, while men are directed to use it twice per day. All of the products involved in this research are sold over-the-counter.

Lipoff and his team looked at data from 24 different pharmacies across four states and compared them by retail price.

In each case, they used the price of the largest container available by volume. When prices varied between different locations within the same chain, they used the average cost.

For the foam products containing five percent minoxidil, researchers found the cost was 40 percent higher per ounce (30 mL) for women than men.

“These are products with the exact same ingredients,” Lipoff said. “They come in different amounts and packaging based on gender, so for the most part, women probably do not even realize they are paying more.”

Lipoff says the justification could be that women will get more out of the product since they require fewer daily doses, or that there could be differences in the cost of product testing, approval, and marketing, but that still leaves women paying more per ounce.

“We recommend that our female patients buy the male version of the product, because it doesn’t seem right to ask a woman to pay more when the products are, for all intents and purposes, identical.”

There is existing research to document gender-based consumer price differences.

A 2015 report found women pay an average of 13 percent more than men on equivalent personal care products. But Lipoff said since most medications are not gender-specific, it’s rare to have the opportunity to compare costs this way.