Nutramedica, a local health and wellness products manufacturer, is aggressively expanding overseas with the aim of raising P390 million in annual export revenues in the next three years.

In a press interview, Nutramedica Chief Executive Mae Velilla said they have now gained a foothold in the United States West Coast and will be expanding to the East Coast and Canada by next year.

Nutramedica’s export business is led by its premium naturally-derived anti-hair loss product, Novuhair, which is now available in California and other major areas in the US West Coast.

For the US launch of Novuhair, Nutramedica shared that it has invested P25.3 million — mainly for advertising and marketing expenses. Sales projection for the year is P53.2 million.

“We have always stood by Novuhair as a globally competitive product. It is the only topical scalp lotion in the market that has the highest concentration of natural ingredients and is FDA-certified and ASEAN Cosmetic Directive (ACD)-compliant,” said Velilla, CEO of Nutramedica. 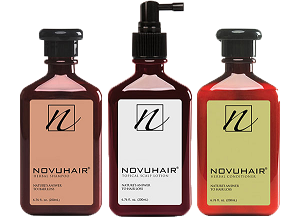 Nutramedica partnered with Asian Commodities Company (ACC) as its exclusive distributor in the US. ACC is the largest Asian food distributor in North America with over 1,500 product lines including some of the most sought-after Philippine-made products such as San Miguel products, Century Tuna, Leslie’s, Magnolia, Master Sardines, Rebisco, Selecta, and other RFM products.

“We are confident with our partnership with ACC for their knowledge and successful history in product distribution. However, Nutramedica exclusively handles marketing in the US,” said Velilla.

The company also maintains an exclusive partnership for distribution with Bee Organic in Kuwait.

“Novuhair is the only natural Philippine-made product for hair loss that has penetrated the US market and is being actively promoted to Filipinos. We have initially focused distribution in California since there is a huge concentration of Filipinos in the territory who patronize Asian-Filipino stores,” said Velilla.

According to the US Census Bureau (2010), there are over 1.1 million Filipinos or more than 4 percent of the total population living in the metropolitan areas of California such as Los Angeles, San Francisco, San Diego, Riverside, and San Jose.

“As we continue with advertising in the coming months, we expect to increase brand awareness at the store and consumer level, as well as address the availability issues in other Filipino stores and boost online sales promotion to eventually increase our monthly sales,” said Velilla.