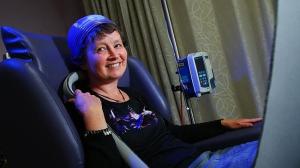 THE thought of losing her hair to cancer was more traumatic for Melinda Bryce than losing a breast.

Her two daughters were in school so her breasts had served their biological purpose. And she figured she could always wear a prosthetic filler if she became self-conscious.

But a new machine at the Royal Women’s Hospital, a first for an Australian public hospital, “freezes” a woman’s scalp before chemotherapy to help prevent her hair falling out from the toxic treatment.

Ms Bryce, 46, a mother of two, is one of the first public patients to use the $38,000 device, donated to the hospital by Treasure Chest, a Melbourne charity that aims to address the holistic needs of a woman after a cancer ­diagnosis.

For 30 minutes before chemo, she wears the snugly fit silicon cap attached by a hose to a portable ­refrigeration unit.

It is kept on during the treatment, and for up to a further two hours after it ends.

Clinical nurse consultant Pauline Thomas said the cap cooled the scalp to -4C, which reduced blood supply to the hair follicles — some of the fastest-multiplying cells in the body — to stop chemotherapy targeting these cells.

“Losing their hair is a ­constant reminder of what they’re going through,” Ms Thomas said. “They usually find hair loss one of the most difficult things to cope with.

“In others they will still have some hair showing, but they might need wear a hat. And in some people, it won’t work at all.”

After her third round of chemotherapy this week, Ms Bryce still has a fringe that pokes out of a headscarf she wears, with only a few sparse bits on the crown. And while it left icicles on her hair after the first session, it was painless and she suffered no side-effects from the cooling.

“There is so much else going on, that not losing your hair is a bonus,” Ms Bryce said. “You can look and feel more like yourself.”