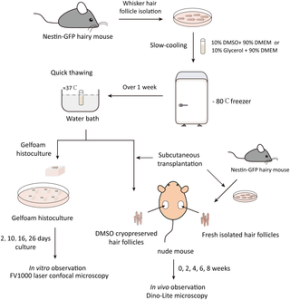 “The ability to transplant cryopreserved hair follicles can allow cancer patients and others to bank their hair follicles for future use if they wish”, said Charlene Cooper, Vice President and Chief Operating Officer of AntiCancer Inc.

AntiCancer Inc., founded in 1984 and based in San Diego, with offices and laboratories in Seoul, Beijing, Nanjing and Tokyo, has developed the leading mouse models of cancer including MetaMouse®, AngioMouse® and StromaMouse®.

These mouse models are made imageable with AntiCancer’s OncoBrite® technology and are the models of choice for novel drug discovery for cancer.

AntiCancer is also developing tumor-targeting bacteria for the general cure of cancer.