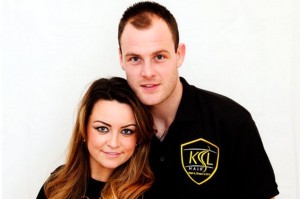 With the first matches of the Premiership league coming up, Celtic FC players Anthony Stokes and Leigh Griffiths are looking forward to taking to the field with new hairlines.

Both players have undergone hair transplantation surgery with hair loss specialists KSL Hair in Glasgow during the close season.

Although the players are only in their twenties, both had clearly receding hair and decided it was time to take action.
Stokes underwent the treatment first, and has acted as a brand ambassador for KSL Hair alongside his fiancée Debbie Lawlor, who has had hair extensions to allow her to make more of her hair.

After he promoted the firm on Twitter, his teammate Griffiths decided to follow suit and have the same procedure.

Both have now been seen sporting new hairlines as a result of the procedure.

Speaking in advance of the procedure, Stokes said; “I believe that KSL Hair is the team to sort this issue once and for all for me, I would urge anyone with any type of hair loss issues to get in touch with the staff at KSL Hair as they understand what you’re going through. They are very professional.”

Griffiths also publicly commented on his procedure; “I’ve been thinking about this for some time now and thought now is as good a time as ever to get it sorted. KSL hair make it so easy to get organised and the process is so straight-forward. I would say, if you have an issue give them a call.”

Speaking on behalf of KSL Hair, founder Simon Lindsay said that the footballers had been very happy with the procedure. “They’ve both been fantastic to work with, and it was great to see them posting so openly about it on Twitter.

We have had celebrity clients before but they don’t tend to speak about it publicly; hair loss can be a big knock to a young man’s self esteem and it is often not something that they want to speak about.

However, I have had the same procedure myself, and it is a great way to restore confidence and remove those barriers.”
Established in January 2013 by husband and wife team Simon and Kayleigh Lindsay, KSL Hair offers affordable hair loss solutions in Glasgow.

From their private clinic in the heart of the city centre they offer a comprehensive range of hair regrowth, replacement and transplantation services, as well as hair extension services, to provide a complete service to both male and female customers.

For more information on KSL Hair and their services, please visit their website at http://www.kslhair.com/.