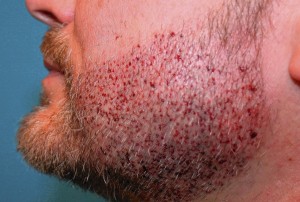 Trouble with your stubble? Fret not.

“It’s more of a pop culture thing,” said Dr. Larry Shapiro, a hair restoration specialist who has offices in Delray Beach and Hollywood. “People want a signature look. They want to stand out.”

Especially in South Florida, home to such follicle-philes as the Brotherhood of Mustaches and Beards social group and one of the world’s go-to destinations for plastic surgery of all types.

“It is a vanity capital,” said Dr. Alan Bauman, a hair restoration specialist in Boca Raton who’s seen his facial hair transplants go from a handful to about 50 men in just a year. “It really started from … men looking for thicker, fuller beards.”

Facial hair transplants aren’t entirely new, though recent advancements have made them more accessible and tolerable.

Once reserved for burn victims or men who wanted to cover up scars left by acne, injuries or a cleft palate, the procedure takes hair from the back of the head and replants it into the face or sideburns.

With a newer technique called the follicular unit extraction, or FUE, doctors remove one follicle at a time from the patient’s donor area, rather than removing strips of scalp, allowing for a more precise execution and shorter recovery periods.

“A lot of it, I think, is awareness about transplants in general,” Charles said, estimating that interest in facial hair transplants among his patients has grown exponentially from what it was a few years ago. “We’re doing a lot more” of the procedures.

It can be a pricey choice, ranging from $3,000 to $10,000, depending on the amount of hair extracted, and where it’s transplanted.

He wouldn’t hesitate to recommend others do the same if they want a fuller look, on their sideburns or their face.

“Years ago, we [men] didn’t have this kind of thing available to us. You got a shave and hair cut, and that was it,” he said.