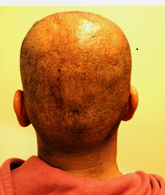 Dr. Sanusi Umar, a top Los Angeles dermatologist and the inventor of the UGraft advanced FUE hair transplant system, has recently published a blog regarding the repair of a patient who presented with poor results from a series of previous FUE hair transplant surgeries provided by another clinic.

The poor results emanated mainly from decimation of the head donor areas on the back and sides of the head from overharvesting using basic FUE methods.

The donor area appeared bare, with the baldness still evident due to the fact that most of the 10,000 grafts transplanted did not grow.

For those severely balding, head donor hair is considered insufficient in meeting the full needs of these patients.

“If you are doing follicular unit extraction as a doctor, or you are a patient looking for follicular unit extraction for your restoration and you are a level 6 or 7, you should be looking for advanced FUE methods that can make use of a combination of your head hair and non-head hair donors,” stated Dr. Umar in a recent article regarding this patient’s prior transplant experiences. “Head and body, all of that needs to be put together to give you a result that can look nearly credible.”

The patient in the example had what is considered a Norwood Level 6 (severe baldness), where he had previously visited another hair transplant clinic as a way to find a solution in correcting his severe baldness.

According to Dr. Umar, the entire head donor area can ideally yield 5,000 to 7,000 grafts. Not surprisingly, the donor was decimated after the 10,000 graft removal.

Additionally, since most of the 10,000 grafts never grew, the patient was left still very bald.

According to Dr. Umar, the poor growth rate is most likely caused by the harvesting of hair from impermanent donor areas of the head, as well as poor technique.

It is possible the patient was not as visibly bald as he is now when they first saw him. According to Dr. Umar, doctors in the face of uncertainty of hair loss progression should err on the side of caution and not adopt such an aggressive approach.

Moreover, Dr. Umar recently published in the Aesthetic Surgery Journal* a new FUE donor screening method called the “FUE Shave Test.” The test is used for detecting in young patients, those who are likely to progress to severe baldness.

This would have been a useful tool in this patient who appeared to have had hair harvested from his balding crown.

Dr. Umar consistently cautions that significantly bald patients and those destined to be severely bald should not attempt a complete restoration using only head donor hair.

“Head donor areas alone just don’t have enough hair to restore a level 6 or level 7 patient,” stated Dr. Umar, who has successfully invented the UGraft advanced FUE system of tools and techniques that prevents this issue from happening.

The UGraft system is used to optimally utilize hairs from the beard, chest, legs, and other parts of the body in order to expand the donor pool. As reported in the currently discussed case, this method has been performed as a credible way to restore even the most severely bald patients without stressing their head donors.**

Body hair donors are considered more delicate for grafting compared to head hair, meaning they require a more specialized approach to prevent damage of the hair follicle and to optimize the healing process.

His previous success rates using the UGraft techniques and tools have been called revolutionary in the field of hair transplantation.

“Significantly, we have found the application of body and beard hair to be very useful in carrying out hair transplant repairs, whereby botched past hair surgeries with decimated donors areas are rehabilitated,” says Dr. Umar.

“Before visiting our office, these repair patients have undergone prior procedures. Often they get to go using inadequate methods that have left the patient still bald and often with unacceptable scarring, and sometimes even disfigurements.”

In this reported patient who sought reparation using the Advanced FUE by UGraft method, Dr. Umar was able to effectively use 6,000 UGrafts primarily from the beard and chest as a way to repair and restore his lost follicles.

Just after five months, the results were already satisfying to the patient. The botched and significantly bald areas were viably concealed in comparison to the prior hair transplant results.

*Umar S. Use of nape and peri-auricular hair by follicular unit extraction to create soft hairlines and temples: my experience with 128 patients. Aesthet Surg J. 2015;35(8):903-909.

For more about Dr. U and his take on FUE hair transplant overharvesting, click here