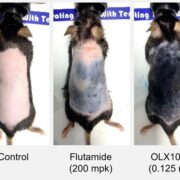 OliX Pharmaceuticals, Inc, a leading developer of RNAi therapeutics, announced that it has demonstrated efficacy in a preclinical study of OLX104C, an investigational RNAi therapeutic in development for androgenic alopecia, also known as hair loss.

In the study, OLX104C was administered topically to a mouse model with suppressed hair growth (Dihydrotestosterone, DHT administered mouse). The study evaluated the percentage of hair regrowth and duration of knockdown of the target protein, AR, following a single injection.

Mice receiving OLX104C showed substantial hair regrowth compared to the control group, and results showed that a single dose could inhibit the expression of the target gene for more than three weeks.

“We are advancing a novel and potentially durable approach to treating hair loss with large market potential,” said Dong Ki Lee, PhD, founder and chief executive officer of OliX Pharmaceuticals. “Due to topical administration, our investigational therapy acts directly on the affected area and is rapidly degraded upon exposure to the blood, so it’s free from major systemic side effects such as sexual dysfunction caused by conventional hair loss therapeutics.

Building on our experience evaluating RNAi therapeutics for skin diseases, we plan to initiate clinical trials of OLX104C by 2022.”

OliX Pharmaceuticals is a clinical-stage pharmaceutical company developing therapeutics against a variety of disorders by down-regulating expression of disease-causing genes, based on its own proprietary RNAi technology. The Company’s core RNAi platform, asymmetric siRNA (asiRNA), is a unique gene silencing technology based on RNA interference (RNAi), which is considered as the most efficient gene silencing technology.

OliX has also developed another therapeutic RNAi platform, GalNAc-asiRNA, to target a variety of liver diseases.

To learn more about the company, visit https://www.olixpharma.com/eng/