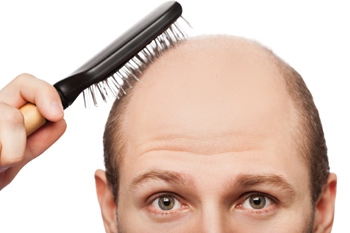 Hair loss can affect both genders, but is more prominent in men, most commonly in the form of androgenetic alopecia, or male-pattern baldness, a condition for which there is no cure.

The National Institutes of Health estimates that 35 million American men suffer from male-pattern baldness, which can drastically alter a man’s appearance.

Glossy, flowing manes, or 360-degree spinning waves can vanish strand by strand, causing many men to mask their faulty follicles with toupees, hats, headbands, comb-overs or hairlines that start at the crown of their heads.

The more affluent can opt for pricey hair transplant surgery; some men throw in the towel and shave their heads bald.

Xiaowei “George” Xu, an associate professor of pathology and laboratory medicine and dermatology at the Perelman School of Medicine, says human hair is a “quite complex organ” composed of two different types of cells: epithelial cells, which make the hair shaft, and dermal papillae cells, which regulate the proliferation of epithelial cells and influence hair growth.

Men with male-pattern baldness lose both cells, causing follicular miniaturization. A hair follicle gradually becomes smaller and smaller before it is altogether lost.

Xu says hair loss is difficult to treat because epithelial stem cells—localized in a stem-cell rich area of the hair follicle known as the bulge—are required for hair to grow. If they are absent, hair growth cannot occur.

Researchers have successfully isolated and characterized epithelial stem cells from a hair follicle, but have been unable to multiply them, a high hurdle in the battle against hair loss.

In search of a solution for several years, Xu and colleagues have made a breakthrough. His research team, which includes experts from the Department of Dermatology at Penn Medicine, the Department of Biology in the School of Arts & Sciences, and the New Jersey Institute of Technology, has found a method to amplify and make scalable amounts of epithelial stem cells.

Xu and his collaborators began by adding three genes to dermal fibroblasts—a type of human skin cell—and converted them into induced pluripotent stem cells (iPSCs), which can differentiate into any type of cell in the body. The researchers then converted iPSCs into a large number of epithelial stem cells that are usually found in a hair follicle’s bulge.

The study marked the first time anyone has created sizable amounts of epithelial stem cells capable of producing the epithelial component of hair follicles.

Their research was published in Nature Communications. Funding was provided by the National Institute of Arthritis and Musculoskeletal and Skin Diseases.

Xu says a key factor in their discovery was manipulating the timing and growth factor of iPSCs to force them to differentiate into epithelial cells.

The cells were able to produce human epidermis and hair follicles, which Xu says were “nearly identical to the epithelial stem cells directly isolated from a hair follicle—biochemically, in gene expression, as well as functionally.”

Xu says his research has promise for the treatment of hair loss in humans. Now that researchers have discovered a way to create epithelial stem cells, they must figure out how to maintain and multiply human dermal papillae cells, a finding that has so far evaded them. He says the ultimate goal is to be able to make a hair follicle in a lab.

“I think we can probably make that happen in 10 years,” Xu says. “I’m pretty confident because we are very close. There is a lot of promise, but there is still a long way to go. But I think it’s very much possible.”