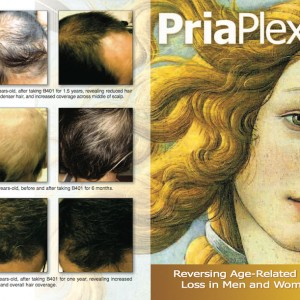 This all-natural oral supplement addresses hair health from the inside out, halting hair loss and supporting new hair growth.

Many participants in a recent two-year evaluation program in the U.S. reported cessation of hair loss within just weeks, followed by appearance of thicker, healthier hair, improved skin tone and overall health and vitality.

While hair loss is a normal part of human aging, excessive hair loss is a significant source of anxiety for many people. Many hair loss options currently available for men present potential side effects and may be of limited efficacy.

Modifying follicle growth to halt hair loss and restore healthy growth is a complicated matter that has been intensely researched. To date scientists have identified a small handful of growth factors and hormones involved in hair proliferation and growth.

To date, PriaPlex is the only natural, oral herbal formula that has been shown to enhance levels of several of these factors, including VEGF (Vascular Endothelial Growth Factor) and HGF (Hepatocyte Growth Factor) in hair follicles.

PriaPlex has also been shown to increase the number of active hair follicles while promoting faster growth and increased length of individual hairs.

Current hair restoration formulas are generally limited to topical hair growth products containing simple herbal ingredients, such as Saw Palmetto, that are ineffective when taken orally. Consequently, topical treatments make up the majority of hair products, working to target “surface” issues involved in hair loss, instead of addressing the “root” of the problem. Coupled with botanical ingredients known to enhance skin blood circulation, findings suggest that PriaPlex’s mechanism of action is superior to that of currently available treatments.

Each of these effects is listed in the patents approved in the United States, Germany and Taiwan, as well as in a host of applications currently pending in Europe and Asia.

To date, only 64 U.S. patents have been granted for inventions addressing human hair issues. Of these, 59 are for products limited exclusively to external (topical) use only. And while the remaining five patents cover products intended for internal use, they contain active ingredients that are not recommended for long term use.

PriaPlex is comprised of essence herbs traditionally used to support healthy endocrine and hormone levels, as well as aiding healthy cardiac function, and is virtually free of side effects.

Numerous clinical cases show that, when used as directed, PriaPlex can help to stop abnormal hair loss within four to eight weeks, with new hairs generally appearing on the scalp in three to six months time. Additionally, the gradual appearance of original hair color has been reported by numerous uses in a as little as six months.

A Few of Our Many Testimonials:

“I first heard of PriaPlex in a newsletter that suggested the product for women who are losing hair, especially on top of our head … yours was the first product that shows results within 4 weeks.” – Eliza Walls

“I am a disabled vet. I had radiation and my hair fell out in places and never grew back. But after about two and a half months, people started telling me my hair looked thicker and shinier in front. I think my complexion has gotten better too. You’ve got a great product here – it works.” – Richard Hancock

“I started losing my hair when I was 19. After 6-8 weeks of taking PriaPlex, I noticed the color of my hair changing, first in my eyebrows and later on my temple…hair was actually growing.” – James Fletcher

“I really love your new hair support formula, PriaPlex. I have been taking it for almost 4 months now and it is really the answer to many of the problems I developed after years of low thyroid. Thank you for a wonderful product – I love the great shine and “healthy” look my hair now has!!!” – Susie Van Buskirk

“I decided to try PriaPlex after many other hair-loss products failed. After taking it for approximately three months, I have noticed actual hair growth on my hairline. This is most exciting! The most important result is that I am happier and more confident about my appearance.” – Diane V.

“After 3 months, my hair is thicker and the bald spots that were once very noticeable are gone. THIS STUFF WORKS.” – Melvin E .Mobley

PriaPlex® is distributed in the U.S. exclusively by Tango Advanced Nutrition of San Francisco, CA.

On January 17, 1992, Jim sat down with guest host Barbara Walters for a live, hour-long interview on Nightline to explain his approach to incorporating vitamins, herbs, and cognitive-enhancing supplements in beverages. This was followed by appearances on CNN, NBC’s A Closer Look, Nightly News With Tom Brokaw, in addition to numerous print interviews.

In 1997, Jim sold his company to spend more time as a nutritional researcher and editor, subsequently authoring several books and hundreds of articles for leading alternative health publications, such as Life Extension Magazine, Vitamin Research News and Focus on Health.

In 2004, Jim formed Tango Advanced Nutrition with renowned herbalist and TCM expert, John Steinke. John began his medical career as an acupuncturist and herbalist specializing in sports medicine, trauma care and performance enhancement for top athletes, including players for the Oakland Raiders and San Francisco 49ers.

Over the last nine years, under the watchful eye of a senior FDA scientist and the toxicology department of UCSF, Tango has evaluated and tested a wide range of advanced anti-aging herbal formulas, all designed by internationally recognized master herbalists. Strict adherence to modern extraction techniques and pharmaceutical manufacturing standards has resulted in the development of Tango’s unique line of 18 advanced herbal formulas, as well as a line of advanced supplements designed by Hyla Cass, MD.