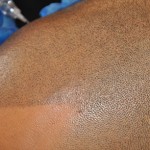 A specialist clinic in the UK has come up with a new technique to disguise men’s baldness by tattooing tiny, coloured pigments into the hair follicles of the scalp.

The thinning hair condition affects millions around the world with a large chunk of them having noticeable hair loss by the age of 35.

There are various factors which cause hair loss.

Previously, the options on the market have been pretty pricey with celebrities such as Wayne Rooney opting for a 25,000-pound hair transplant, but now the budget tattoo means that more men can cover their bare heads — as long as they don’t mind looking like a skinhead, the Daily Star reported.

What happens in the treatment

Scalp tattooPigment dots are tattooed into the hair follicles and from a distance it gives the illusion of an even ‘just shaved’ look. This look is popular among celebrities such as David Beckham and Wentworth Miller.

After he lost his hair he asked his wife to draw black dots onto his scalp using fine ink pen and the idea for a more permanent solution developed from there.

The treatment is a non-invasive procedure requiring no anaesthetic, incisions or adhesives, involves nothing more than mild discomfort. It leaves no scars and is perfectly adaptable for if and when you experience further hair loss, or if your style preferences change.

This method is also called scalp micropigmentation and the cost may vary from one place to the other. According to Dr Shuba Dharmana, a hair transplant surgeon, ‘The process is tedious and may be done in two sittings to cover the entire scalp. The results are dramatic and offer a great solution to people who have no hair for hair transplantation or cannot afford hair transplantation. It can also be used to cover up a previous hair transplant scar.

Any tattoo will fade slightly with time and this can be touched up in due course of time. But remember that it is important to go to the right person because otherwise it can look harsh and fake.’