Women who suffer from thinning eyebrows will be enthused by data gained in an exploratory study for hair regrowth in men by a drug labeled RPHE-7193.

This drug was then examined as it applied to women who suffer from thinning eyebrows. In the results, there were solid statistical indicators that women who had thinning eyebrows gained their eyebrows back in the areas where no eyebrow hair was growing anymore.

The cosmetic result was more volume with thicker eyebrows. According to Robert Gadimian of Rophe Pharma, these positive results were seen after only 4-6 weeks of treatment.

A common cause of thinning of the eyebrows is over-plucking which technically is called, traction alopecia. It is a stress on the individual hairs and the follicles which produce the hair.

It is most commonly found in people with ponytails or cornrows that pull on the hair with excessive force. In addition, rigorous brushing, heat styling and rough scalp massage can damage the hair’s cuticle, the hard, outer casing of the hair. 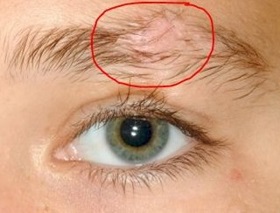 This causes individual strands to become weak and break off, reducing overall hair volume. Each time a hair is plucked, there is a chance of permanent follicular damage and no regrowth.

Over years of stress, the incidence of hair loss from traumatic plucking increases. Add to this the fact that eyebrows thin with age, as does all body hair growth, and the end result is something a lot of women find aesthetically unpleasant. Gadimian said his company realized that up until now no drug had been approved to treat thinning eyebrows in women, so studies were initiated with RPHE-71093 and the results are encouraging.

Rophe Pharma researchers analyzed results of RPHE-7193 in women suffering from thinning eyebrows and were amazed by the positive results.

Since cosmetic treatments do not provide satisfactory results and are usually a temporary remedy it seems the efficacy of RPHE-71093 in helping women to gain their own eyebrows back could become the most preferred option for restoring hair growth in this area.

Encouraged by these results, the company has also initiated an exploratory study to evaluate if RPHE-7193 can stimulate the growth of eyelashes in women. The results will be announced shortly.