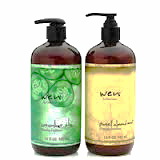 Actresses Alyssa Milano and Christina Applegate have touted the products on infomercials. So has Brooke Shields, who in one commercial flips her hair, looks into the camera, and says, “Wen is the only thing that can change everything for your hair.”

Waverly Robinson of Davie didn’t get the softer, shinier, bouncier locks that Shields or the other A-list celebrities have raved about, but she agrees that Wen’s cleansing condition definitely “change[d] everything” for her hair.

According to a lawsuit filed in Broward County in April, Robinson says Wen products caused balding, dryness, thinning, and an itchy scalp. Her claims mirror hundreds of others in an ongoing class-action suit.

“The products are the cause of widespread hair loss suffered by the Plaintiff,” the complaint states.

“Simply put, no reasonable consumer would purchase a hair product, like the ones at issue, if they knew at the time of purchase that it would cause their hair to fall out.”

On Consumer Affairs’ site, a woman from Brandon, Florida, wrote in January: “I used this product, and I lost half of my hair and have huge bald spots.” A few weeks later, a woman in Loxahatchee wrote,

“In less than a month, my hair was coming out in patches… I was bald for about 1.5 years before it grew in.” In February, a woman from Orlando reported, “Each time [I used Wen], I had clumps of hair falling out in my shower, all over my comb and brush… I had so much hair falling out that I got scared and started crying.”

In 2014, more than 200 people joined a California class-action lawsuit against Wen by Chaz Dean. They alleged that the cleansing conditioner, which costs as much as $32 for 16 ounces, leads to balding and rashes. The litigation is ongoing.

Robinson purchased the Wen cleansing conditioner from QVC and paid more than $100 for the hair-care package. Robinson’s suit — unlike the other class action against Wen — also goes after QVC, the billion-dollar TV infomercial channel that sells Wen and other products.

The complaint accuses QVC of not disclosing the adverse effects.

A QVC spokesperson was unable to comment on the litigation. Wen spokesperson Joe Hixson tells New Times that Robinson’s suit is similar to the other. “It does not present solid evidence.

It’s speculation is what it is. There’s nothing to show that the people having issues are not for the hundreds of other issues like alopecia (a condition causing hair loss), stress, or allergy,” he says. “It’s concerning that millions of bottles have been sold and the universe of people having problems is so small.”

Robinson’s attorney, Josh Eggnatz, explains that the litigation is in its initial stages. His firm represents Robinson and other buyers in Florida. “Chaz Dean and QVC represent themselves as reputable companies, and consumers rely on the reputation and purchase from them.

It’s the same reason people purchase the name brand and not the store brand,” Eggnatz tells New Times. “Certainly if our client had known that this product would cause her hair to thin and fall out, if it was disclosed on the label, then she would not have purchased it and wouldn’t have paid the price that she did.”