Fusion Salon in Davenport hosted its first annual Cut-A-Thon event on Saturday. All of the event’s proceeds will benefit the Children With Hair Loss organization, which gives free wigs to children struggling with hair loss.

Over 14 people donated their hair at the event.

“My godmother had brain cancer a few years ago and so it’s kind of connected to that,” said Cheyenne Morton.

Sarah Dodd, the Fusion Salon coordinator, said she has a special connection with the Children With Hair Loss organization since her sibling grew up with Alopecia.

“But you don’t realize how much self-confidence you lose with having no hair and seeing my sibling have to go through that and the bullying, and the peer pressure and the nervous just to go to school every single day, you know, it’s… touches your heart,” she said.

Amy Fieser has donated her hair several times. She said Saturday’s donation had a more personable meaning to her since her family member had to shave her head after being diagnosed with a brain tumor in January.

“She was able to get through it, wore a lot of scarves and hats, but never embraced the… there are no pictures, but she was always beautiful,” said Fieser.

Her daughter, Alura, shaved her head in January to support her family member.

“In the middle of winter, which was very cold, but it was totally worth it. I would do it in a heartbeat again,” she said.

Amy donated a total of 96 inches of hair on Saturday. She was looking forward to the new change in addition to supporting those affected by hair loss.

“And of course with the amount of hair I’m donating, it’ll make a difference, so that’s cool too,” she said.

“I hope you’re willing to walk outside without having to wear a wig and maybe not have any hair there, but still be comfortable, and even if you aren’t, that’s still okay. I just hope you feel good about yourself in whatever way you choose,” said Alura Fieser.

In addition to hair and cash donations, there was also a silent auction, raffle, and baked goods were sold. Fusion Salon raised over two thousand dollars and plans on hosting the Cut-A-Thon as an annual event. 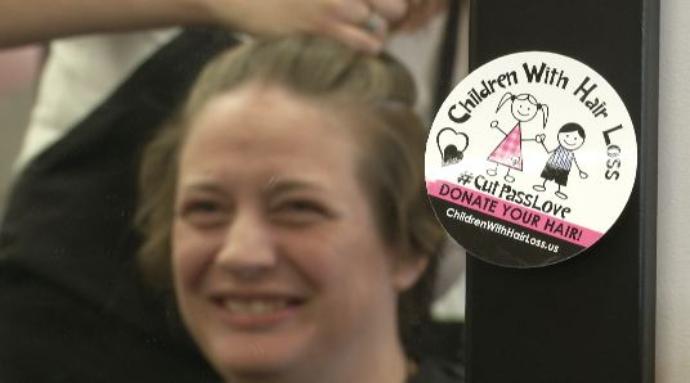