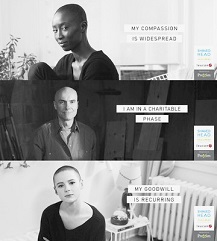 This year, in an effort to return the focus on the beauty of the action taken by thousands of participants each year, the Association is placing them at the heart of its new campaign.

In this way, Leucan highlights the generosity of the difficult yet gratifying choice participants make of having their heads shaved to raise funds for cancer-stricken children and their families.

To put the spotlight fully on the participants and showcase the pride they feel after their Challenge, the ad designers insisted on actively involving a few of them in this campaign.

“Experiencing the Challenge is an incredible opportunity, but it’s mostly very rewarding to know that I will inspire others to take action,” says Brontë Poiré-Prest, one of the participants featured in this campaign who took on the Challenge in 2015.

“Designed generously by TAM-TAM\TBWA, this new integrated campaign, which will be rolled out on television and radio, as well as in print, billboards, social media and the web, is sure to raise awareness of the cause and of the event,” explains Lysanne Groulx, Marketing, Communications and Social Networks Director.

For the TV commercial, the Association looked once again to an outstanding director from Quebec, this time collaborating with Rafaël Ouellet, who most notably directed the TV series Nouvelle adresse and the feature film Camion.

The ad can be viewed online on Leucan’s YouTube channel.

Throughout the year and across the province, over 60 shaving sites will be held by Leucan, in addition to the many Challenges hosted by companies, organizations and educational institutions.

We also urge people to pick a time and place of their choice and to create their own Personalized Challenge. As usual, there will be a provincial Challenge day set out for May 29, 2016.

For this edition, the official shaving site will be at Place Versailles. To take on the Challenge or sponsor a participant, please visit shavedheadchallenge.com.

Finally, Leucan wishes to thank PROXIM, the new generous presenting sponsor of the Challenge, Mia for selling its exclusive earrings of hope for a second year, with proceeds going to Leucan, as well as the humorist Dominic Paquet, the Challenge’s provincial spokesperson for a fifth year in a row.


The Leucan Shaved Head Challenge is a major fundraiser of Leucan that engages the community in a spirit of solidarity to provide services to cancer-stricken children and their families as well as providing financial support to clinical research.

It is also a gesture of support for children whose body image is altered when chemotherapy provokes hair loss.


For more than 35 years, Leucan has been supporting cancer-stricken children and their families from the day of diagnosis through every stage of the disease.

As a loyal ally of hundreds of families and thousands of members across Quebec, the Association provides specific and personalized services delivered by a qualified team with a cutting edge expertise.

Leucan also funds clinical research and the Leucan Information Centre. With its many offices, Leucan is present throughout Quebec.


PROXIM will be celebrating its 10th anniversary in 2016, and was created following the consolidation of independent pharmacist-owners.

With over 250 pharmacies throughout Québec, pharmacist-owners affiliated with PROXIM are leading health professionals in their community. Their priority is to provide specialized and customized support to their patients for improved health.

Transplant 17000 hair in one sitting
Scroll to top