The global alopecia market was valued at over USD 7.3 billion in 2015. Key factors attributing to the growth of the alopecia market include the increasing prevalence of various chronic diseases such as arthritis, depression, PCOS, diabetes mellitus, hypertension, and cancer, easy access to scalp treatment, and the research & development of several alopecia treatment products.

Changing lifestyles of people such as the increasing consumption of alcohol, tobacco, and other associated products, increasing stress levels, and the rapidly increasing geriatric population are expected to boost the alopecia treatment market during the forecast period.

The increasing disposable incomes coupled with the rising celebrity culture and the increased emphasis being laid on aesthetic appearance; these factors altogether are contributing to the alopecia treatment market growth.

Additionally, technological advancements on the ground of product development of novel therapeutic options are some other important drivers of the alopecia market.

The increasing level of air and water pollution and genetic disorders are also leading to the increasing prevalence of hair loss. 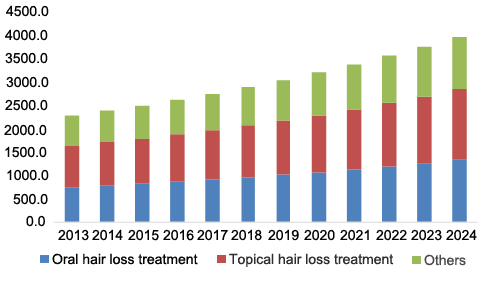 Topical treatment generally includes topical corticosteroids, which are available in the form of lotions, gels, and liquids.

The large share of topical treatments is attributed to the high absorbability and non-invasive nature of these treatments, which are the highest impact rendering drivers of this market. However, oral treatments are expected to witness high growth over the forecast period. The two major brands of the alopecia products are Rogaine and Propecia.

Some other brands include Viviscal, Kirkland, Phyto, Amplixin, Ultrax, Proscar, and others. Propecia is used widely since it is found to be more effective in stimulating the growth of damaged hair follicles and is approved by the U.S. FDA. Additionally, it is available in two forms namely liquid and foam, thus it is easy to apply and has minimal side effects.

The major underlying reason is the growing male geriatric population and the smoking habits of men. However, low awareness levels amongst the male population are one of the key factors for the large share of women population in the alopecia treatment market.

In women Polycystic Ovary Syndrome (PCOS) is frequent and it causes hormonal imbalance which leads to androgenetic alopecia. Traction alopecia is also commonly encountered in women due to the increased stress on hair follicles created by certain hairstyles.

In 2015, the alopecia therapeutics in women accounted for over USD 1,370 million and is expected to continue its dominance over the forecast period. High awareness amongst women population pertaining to the hair treatments are the key factors accounting for the large share of the women population seeking therapeutics for alopecia. Alopecia Areata and Telogen Effluvium alopecia are other common types of alopecia found in both men as well as women.

Key regional markets included in the alopecia treatment market are North America, Asia Pacific, Europe, Latin America, and MEA. In 2015, North America accounted for the majority of the market share and was the highest revenue generating region with the revenue of over USD 2,480 million.

The presence of technologically advanced healthcare infrastructure, high disposable income, and the availability of novel therapeutic options pertaining to the alopecia treatments are few factors contributing to the high market share of the region. Additionally, the high prevalence and the proportionally high treatment rates pertaining to hair loss in the U.S. are high impact drivers for the North America Alopecia therapeutics market.

However, Asia Pacific is expected to grow at a lucrative CAGR of 5.3% over the coming eight years. The large population suffering from alopecia and the rising awareness levels pertaining to the available therapeutic options is one of the key factors for the region’s high growth rate. The economic development coupled with the constantly rising disposable income in countries such as China, India, and Singapore will present high growth opportunities. The recent innovations and technological trends in alopecia treatment, the increasing healthcare expenditures, and the augmented healthcare facilities are expected to boost the alopecia treatment market.

The increasing research and development efforts to enhance alopecia treatments, the strategic initiatives taken by the key players of the market, and the FDA approval obtained for certain products are the major competitive strategies paving towards the alopecia market expansion. In April 2016, Johnson & Johnson declared the launch of a new global healthcare initiative to provide healthcare solutions, in Africa. In January 2016, Cipla announced that they have 200 drugs under development, of which 50 drugs have the potential to generate USD 30 billion.